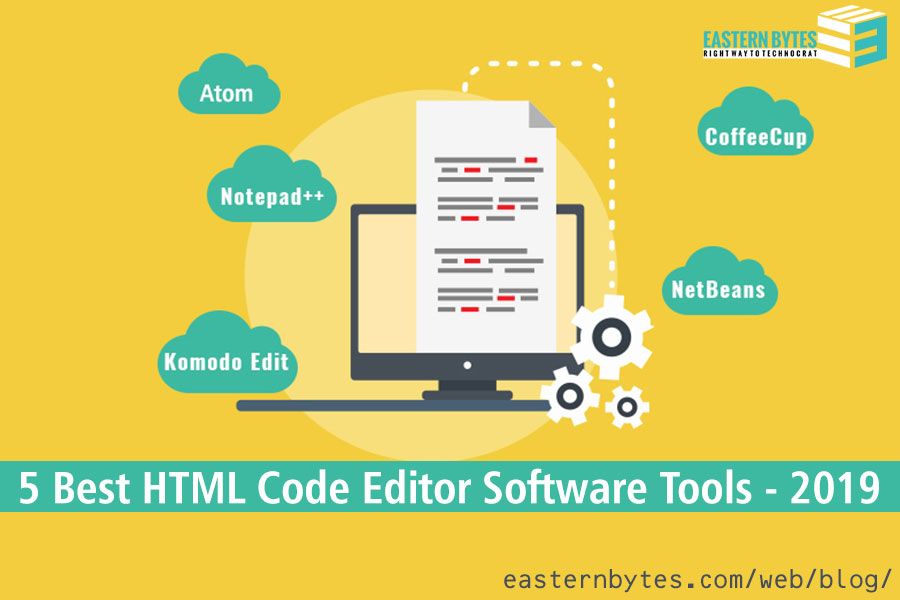 We all make mistakes, web designer genius or a beginner. Even a small error, such as forgetting to put the end tag on a code element, can lead to a big headache and compromise the end result you’re aiming for. As one of the most fundamental languages for website creation, you can’t go wrong with a little HTML knowledge in your back pocket.

There are a lot of HTML editors available, which makes finding one that’s perfect for you a bit of a challenge. During the original testing process, over 100 HTML editors for Windows relevant to both professional and beginning web designers and web developers, as well as small business owners. From that testing, ten HTML editors that stood above the rest were selected.

The list of the best HTML editors is based on popularity, features and design:

Atom is a relatively new editor that was developed by the GitHub team in 2014. Atom is a free, open-source code editor and available for Windows, OS X, and Linux (64-bit). Atom uses a free software license for their package and it is maintained by the GitHub community. They aim to offer a premium feel to the editor while keeping it completely free. It is advertised as the ‘most hackable’ text editor on the market, meaning that its source code is freely available for developers to edit however they like.

What’s more, being ‘hackable’ makes it easy to customize. It means that developers can contribute to edit, extend, change, and share the program source code as well as create their own packages to improve Atom. That, plus the fact that it integrates seamlessly with GitHub, means it can be an excellent choice.

Notepad++ is a favourite free note-taking app and code editor, which was developed for Windows-based machines. Linux users can also use it via Wine. It is a more robust version of the Notepad software that you would find available in Windows by default. That being the case, this is a Windows-only option. It includes things like line number, colour coding, hints, and other helpful tools that the standard Notepad application does not have. These additions make Notepad++ an ideal choice for web designers and front end developers.

Notepad++ is also open source, which means that its interface and features can be customized to match your personal preferences. Plus, there’s even a mobile version. Here are some highlights:

This free HTML editor includes some robust features, such as auto-completion and debugging tools, includes a lot of great features for HTML and CSS development. Additionally, you can get extensions to add language support or other helpful features, like special characters. It can also edit several other coding languages, including Python, Perl, and Node.js. Komodo doesn’t outshine as the best HTML editor, but it’s great for the price, especially if you build in XML where it truly excels.

CoffeeCup offers a free HTML editor with an old-school look and feel, but it is easier to use than you might think. It’s a popular option for HTML and CSS coding. But if you’re looking for more of a WYSIWYG (what you see is what you get) setup, it offers a visual editor for an additional cost.

CoffeeCup is a simple text-based editor. It’s been around since 1996 and remains the top choice for many developers. Plus, it:

A free and open-source integrated development environment (IDE), Apache’s NetBeans can help you develop in HTML5, PHP, JavaScript, C++, and several other coding languages. It has code templates, project management tools, and loads of plug-ins.

It’s handy while developing web, mobile, and desktop applications. With this free HTML editor, you will be able to build robust products of your choice.

It has a steep learning curve because it doesn’t often work in the same way that web editors work. Once you get used to it you’ll find it very useful, however.

With the broad selection of tools, you’ll be able to code stress-free. NetBeans offers you all the needed features to write bug-free code. It will help you code fast and smart and efficiently manage your projects.

NetBeans also has a large plugin marketplace, and developers are encouraged to write and share their own plugins. NetBeans was last updated in April of 2019.

Whether you’re only starting to code, or you’re an experienced developer, using an HTML editor is a good idea. Getting a helping hand to write code faster and more efficiently is becoming a must, now more than ever. Whether you just started coding or you’re a seasoned vet, we believe that an HTML editor can become anyone’s best friend. An HTML editor can help to catch errors in your code as you work, making the process of development easier and more efficient.

So pick one (or a couple), install it and get coding!

Things to Do Before Updating WordPress

Responsive Web Design – What It Is And How Does Work

It is with great appreciation, that I recommend Sumanta Basak and his organization Eastern Bytes to you as an excellent design and software development company. Our organization has work with Sum and his team over several years now, directly on our projects, as well as our client’s projects - in which we have referred to them. They have designed and developed everything from WordPress websites to Internet and mobile applications.